Ancient Coins Collecting is a challenging task, but it's the best way to enjoy and learn history of ancient civilizations.

As everyone knows, coins are a form of money or medium of exchange. In addition to coins and paper currency as we now know them, a wide variety of items have been used as money at different times in history, both prior to and after the invention of coins.

The minting of coins spread rapidly from Lydia to the city states of ancient Greece. Around 600 BC , the island of Aegina produced what are believed to be the first Greek coins. These coins were known as silver drachmae and obols and depicted a turtle on the reverse, the symbol of Aegina.

The nearby Greek city state of Cornith soon followed Aegina and produced drachmae coins with the legendary figure of the winged horse Pegasus on the reverse.

The largest of the Greek city states was Athens which around 610 BC began producing very artistic coins often featuring an amphora or wine vessel design.

Alexander the Great (336-323 B.C.) established the practice of coinage throughout the Hellenic empires. His successors introduced portraits as a regular feature of their coinage designs thereby recording for posterity many images of ancient kings and rulers. 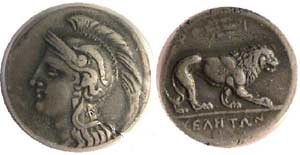 The Romans were the next major state to establish coinage on a large scale.
It is usual to date the first Roman coins from 269 BC when a mint for the striking of gold, silver and bronze coins was established in Rome.

Ancient Roman coinage often depicted a portrait of the then ruling emperor and, in some cases, members of the imperial family as well. These Roman "portrait" coins were skillfully engraved and are wonderful pieces of art and of interest to the historian.

Early Roman coins were often employed to disseminate political propaganda.
The inscriptions on the reverses of the coins frequently proclaimed the emperor's civic achievements or military triumphs. In some cases, very important events, such as the assassination of Julius Caesar, were depicted on the coinage.

It is hard to overstate the problem. The current market is overrun with fakes of ancient Chinese knife, spade, cash, and related cast bronze objects. Since about 1985 forgers in the PRC have developed new techniques in the service of faking bronze vessels and other antiquities of high value.

These techniques are easily applied to coins. Reportedly, dealers will take rare coins to these factories where they are reproduced, with the correct metal composition, patination color and type of soil adhesion proper to that dynasty and type. Traditional methods of forgery detection are impotent against these fakes, and the problem now extends down to some fairly inexpensive items. 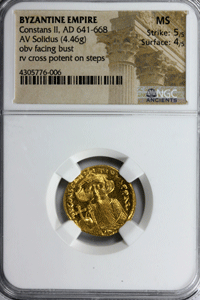 With the latest ancient coin grading program provided by NGC - NGC Ancients you can finally have a collection of ancient coins with a piece of mind. You can purchase more than one thousand years old coin full of original luster from the online auction site, such as an Ebay at the comfort of your home. This opens new opportunities for ancient coin collectors who would like to have a collection of beautiful golden Roman empire coins.

NGC Ancient uses a new grading system and in the circulated grades strictly describes the amount of wear a coin has suffered; however, in the uncirculated grades it will take into account the overall appearance of the coin to distinguish among Mint State, Choice Mint State and Gem Mint State.

You would need to have a latest information to make sure you are buying something valuable when considering buying ancient or antique coins. Forums are best source of this information, since they constantly get updated and reflect the best the concerns and useful information about coins.
Here are some of the forums, which you can find useful:
FORVM Ancient Coins

06/12/2021
Market Analysis: Ancient coins with stories in CNG auction
A bronze drachm dated RY 8 (A.D. 144 to 145) minted in Alexandria, Egypt, under Antoninus Pius featuring a zodiac wheel and graded Extremely Fine by CNG sold for $43,200 in May. more info

06/09/2021
You can coin it in with this branch of antiques!
But even ancient coins don’t have to be expensive However, just because a coin is 2,000 years old does not mean it must be expensive. I have a good collection of old Roman coins ... more info

04/01/2021
Ancient coins may solve mystery of murderous 1600s pirate
an amateur historian and metal detectorist who found the first intact 17th-century Arabian coin in a meadow in Middletown. That ancient pocket change — among the oldest ever found in North ... more info

06/11/2021
Pune: 9 arrested for bid to dupe man over ‘ancient coin worth Rs 10 crore’
According to a press release on Friday, some of the accused had approached a home guard, Vaibhav Tavare, to sell him the alleged ancient coin. The accused told Tavare that the coin contains 'high ... more info